Many years ago I attended a talk by the artist/engineer Jeff Lieberman, who amongst many other things invented the Slow Dance, a “picture frame that makes real objects appear to move in slow motion.” I have seen them up close, they are very cool. Jeff is very cool too, I had a few chats with him near MIT back in the day.

In the talk, one of his premises was that human consciousness evolves.

Lieberman provided a compressed history of the universe relevant to consciousness. Our universe starts with undifferentiated energy, then we end up with these various layers of organization emerging from previous layers:

Human perception does not by default work so well for layers that are smaller/larger than our little world. We can’t even perceive these other worlds without the help of technology. The perception we have is the result of evolution, as Lieberman puts it:

What we take for granted as real on a day to day basis is completely determined by what was functional for our evolutionary past.

This means not only are we not able to observe outside our small window of perception—unless we use technology—but our brain is actually “creating a lie” to operate with. The brain constructs patterns. Lieberman shows some examples, such as a visual illusion and how viewing a symbol in slow motion shows the waves which we can’t see with normal vision.

Not from the talk but here’s a popular illusion, in which squares A and B look different shades but they are in fact exactly the same shade: 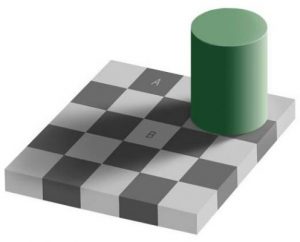 The Lieberman talk reminded me of the theory of perception as an interface from cognitive psychologist Donald Hoffman. The mainstream theories of cognition and AI usually consider perception as building representations of the real world in our brains—a reconstruction of sorts. Hoffman himself wrote an excellent book, Visual Intelligence, about all the rules our vision systems use to reconstruct reality.

But according to the Interface Theory, the construction of reality may not actually be a reconstruction. The phenomenal sense of something need not resemble the relational sense. Our perception builds fictions that are useful for the organism to survive. And this also is a result of evolution.1Hoffman, D.D. “The Interface Theory of Perception: Natural Selection Drives True Perception To Swift Extinction.” Chapter in Object Categorization: Computer and Human Vision Perspectives ed. Dickinson, S., Tarr, M., Leonardis A. & Schiele B.. Cambridge University Press, 2009. http://www.cogsci.uci.edu/%7Eddhoff/interface.pdf

Back to Lieberman, he then went on to talk about consciousness in evolutionarily older organisms, especially cavemen, and that we should not assume that we are the apex of consciousness. I.e., who knows what potentially better (depending on the context of “better”) consciousness will become widespread in the future.