As a kid I read many science fiction stories from long before my birth. Some were from issues of The Magazine of Fantasy & Science Fiction that I recovered from the dump.

The one cover that I remember the most was Mel Hunter‘s depiction of a retro-futuristic vacuum tube powered robot, sitting alone in a post-apocalyptic world, listening to a vinyl record. This was one of several covers by Hunter featuring the lonely robot. 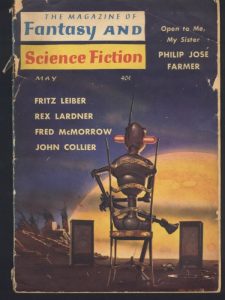 In 2011, I saw the painting in real life (unless it was a reproduction?) at Boskone, a science fiction literature convention in Boston. 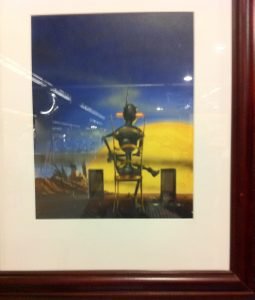 There seems to have been a wee apocalypse in the illustration. Some people might assume that the lonely robot had something to do with that apocalypse. However, I interpret it to show the sad fate of a robot more rugged than biological life.

The image reminds me of Ray Bradbury’s short story, “There Will Come Soft Rains.” In that story, a home automation system continues working day after day despite that all the humans are gone, like an artificial mega-Jeeves except without the kind of common sense that would make it realize its owners were dead. One day the house is destroyed by a fire.

Among the ruins, one wall stood alone. Within the wall, a last voice said, over and over again and again, even as the sun rose to shine upon the heaped rubble and steam: