Why My Computer Didn’t Do (All of) My Homework: How to Start Making Bad AI

In my innocent early teenage years of computer programming I started dabbling in Artificial Intelligence (AI).

I wanted my computer to write natural language. I’m not sure why, but I think the main triggers were:

The first thing I did was make a new version of ELIZA called Ernie.

Ernie would swear, insult your mother, and generally piss you off.

These next couple screenshots may be offensive to some people but this was the type of humor that existed where I grew up and after all the point was to be offensive. Presented here in a historical fashion not as a recommendation of humor or AI:

In the interest of education, I took the liberty of installing it on some of my high school’s computers. Later I augmented it with a program I wrote called Expletive Generator.

I also tried to make programs to auto generate prose, perhaps in the hope that this would somehow do my homework for me. Homework in middle school and high school was generally annoying to me as it was usually a rude distraction from my main interests.

I also experimented with computer-generated poetry. You occasionally got mildly provocative drivel as a result of the uncompromising creativity of random combinations. Here is an example:

I combined a few of them together, printed the results out, and submitted it in a high school creative writing class.

I can’t say I “get” it but it sounds pretty cool.

At first, I didn’t realize I was coding AI. My notion of “AI” was from science fiction. 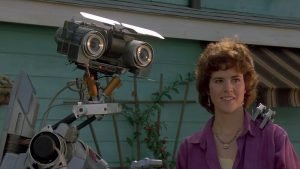 But I happened upon two AI textbooks at the town dump which I brought home. One was Winston2P.H. Winston, Artificial Intelligence, 2nd ed., Addison Wesley, 1984., and the other was Charniak and McDermott3E. Charniak and D. McDermott, Introduction to Artificial Intelligence, Addison Wesley, 1985. And no, they did not convert me to LISP. In fact, to my teenage mind they were a bit dry—the most exciting part was the term “artificial intelligence.”

The main influence those books had on me was to recognize that AI was a real field of endeavor and that natural language parsing and generation was part of it.

Where is the Meaning?

Now, why would it surprise me that natural language generation was part of the field of AI?

I think the reason is that at first, language understanding and generation seems like it can be done easily in one’s mind, but then when you start writing programs you realize it’s not that easy.

The other reason I might have been surprised is that the generation of text seems like a peripheral activity. It’s not even the real “intelligence,” it’s merely an interface to world.

Nowadays, I realize how important interfaces and the environment are to mental phenomena.

And there never is a “center” to the mind—eventually the homunculus must be slayed.

But, why would computer code to deal with natural language seem like an unwelcome cousin to the the AI party? Well, the main reason is the lack of meaning.

One might say a dictionary has meanings, but it doesn’t really. It’s just a tool that allows an organism such as a human to understand one word in terms of others. Imagine if you kept following definitions forever, never reaching the final definition that made sense to you. That’s kind of how most computer programs are—they never reach the final destination of meaning.

Symbols seduce you into thinking anything is possible, and just around the corner. But symbols are a double edged sword. Or a carnival hall of mirrors. Whatever metaphor you like, the bottom line is that amateur symbol juggling won’t magically create meaning.

Words, symbols, definitions, concepts…they lead to more symbols, but eventually they have to hit “ground.”

Us humans are “grounded” through our biological evolution as animals with bodies interacting in an environment. But most, if not all, computer programs do not have any kind of human-like grounding.

My programs were strange bastard children of context free grammars and Mad Libs. After about two years of writing these programs during high school, I stopped working on them. Something was missing, and that was meaning.

Note that creativity was not missing. Pseudo-random combinations proved to be quite creative.

But there was no architecture of understanding anything. Also missing were large stores of knowledge that linked concepts together. There was no memory of experience like a human might have.

I suspect that to make an AI really use human-like knowledge requires an architecture that connects code to the world that humans occupy. And has some sort of way to know about common things humans deal with.

And so, as a segue to future blog posts, the main problems were: