To create an artificial intelligence similar to humans or other animals, it has to have some way to generate meaning.

A potential mechanism of meaning is an emotional system which has built in symbol grounding.

Emotional development might be a major factor in how symbol grounding happens in biological creatures.

When I talk about symbols here, first off, they’re physically created symbols—which can be observed externally like when a child visually draws or writes.

But I’m also talking about thinking with symbols in general. Internally the young human mind develops symbols—which could be very different than your typical notion of “symbol“—and ways to think with those internal symbols.

Here I’m asking: are these symbolic abilities dependent on emotional changes in that same cognitive architecture?

Before getting into emotions, lets take a higher level look at development levels of children.

The Piaget theoretical framework of how a child’s mind transforms as it grows has four stages:1McLeod, S. A. (2009). Jean Piaget | Cognitive Theory. Retrieved from http://www.simplypsychology.org/piaget.html

The actual years in which the stages occur, especially Formal Operational, have been debated for decades, but here I’m not concerned with exact years. An AI system could be time compressed or expanded, and might actually be a new kind of animal (not purely human) so its stages could be different in many ways.

In the book The First Idea, Stanley I. Greenspan and Stuart G. Shanker proposed nine childhood stages of cognitive development based on emotional functional development. The theories proposed in their book are based on child and infant clinical studies as well as non-human primate studies.

Each stage overlaps with previous stages, as opposed to Piaget’s first three stages which end as the next begins:

these emotional abilities build on one another. For example, a baby must be engaged in a relationship with a caregiver for loving feelings to become part of an emotional exchange of signals. Using emotional ideas—“I feel sad”—precedes building logical bridges between emotional ideas: “I feel sad because you didn’t play with me.”2Greenspan, S.I. & Shanker, S.G, The First Idea: How Symbols, Language, and Intelligence Evolved from Our Primate Ancestors to Modern Humans, Da Capo Press, 2004.

Here is a table summarizing the stages. Note that Greenspan and Shanker warn that these are rough categorizations of a continuous development process:

Greenspan and Shanker also theorized adolescence and adulthood stages as follows, although they seem to be oriented towards what I would guess are Greenspan’s clinical psychiatry ideas of a healthy and normal adult (I won’t discuss these here):

Greenspan and Shanker claim that Piaget and company did not figure out how symbols are formed, and that Piaget viewed emotions as more of a secondary phenomenon. There is some interesting design ideas in Piaget’s schemas, and they aren’t necessarily at cross-purposes with the emotional approach, but I am not going to get into schemas here.

Even abstract, intellectual concepts, those that underlie theoretical scientific speculations, also reach back to a child’s felt experience.2Greenspan, S.I. & Shanker, S.G, The First Idea: How Symbols, Language, and Intelligence Evolved from Our Primate Ancestors to Modern Humans, Da Capo Press, 2004.

From the beginning, a baby dual codes every sensation:

As Greenspan and Shanker exemplify:

Thus, a blanket may feel smooth and pleasant or itchy and irritating…a voice loud and inviting or jarring…2Greenspan, S.I. & Shanker, S.G, The First Idea: How Symbols, Language, and Intelligence Evolved from Our Primate Ancestors to Modern Humans, Da Capo Press, 2004.

In Stage 1 (Regulation and Interest in the World), a baby’s interest in the world is largely due to the relationship with the caregivers. In Stage 2 (Engaging and Relating), a baby is obsessed with the primary caregiver. The emotional interactions, according to Greenspan and Shanker, cause a baby to discriminate the emotional interests of the human world from that of the inanimate world, and to learn pattern recognition.

Greenspan and Shanker claim that the baby-caregiver interactions are crucial to cognitive development and involves these constructs:

During Stage 5, a baby begins using mental symbols. They are also using verbal symbols, aka words.

There are two conditions to form mental symbols:

Are there examples of AI systems with bodies that have perception directly triggering action? Why yes, yes there are…

W. Grey Walter’s turtle robots made in the 1940s / 1950s were based on the tight coupling between perception and action. So were Braitenberg‘s “Vehicles” of 19843Braitenberg, V. (1984). Vehicles: Experiments in synthetic psychology. Cambridge, MA: MIT Press.. Many “reflexive” or “behavioral” AI architectures have been made, with Subsumption starting in the 1980s being the most influential. Sometimes the reflexive system is a layer within a larger system that also includes, for instance, high level (but slower) planning.

Unlike adult humans, these reflexive robots do not have mental symbols. 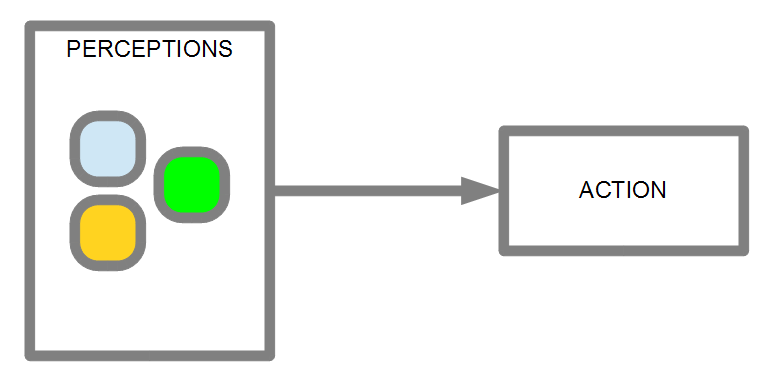 Somehow, humans have a cognitive development step that allows an image—a multisensory structure—to be disconnected from action. This is a “freestanding image”. 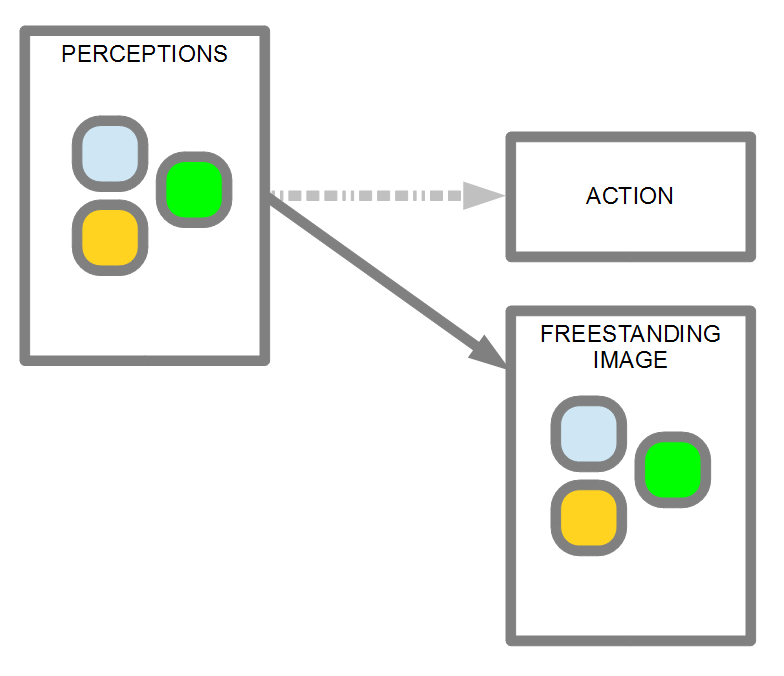 The aforementioned “somehow” is via emotional interactions with a caregiver that result in an infant taming emotional patterns.

One thing that may seem strange about this — the development of symbol formation is dependent on initial external interactions before it can continue on internally.

Then the next step that allows a true symbol to form is the emotional linkage: 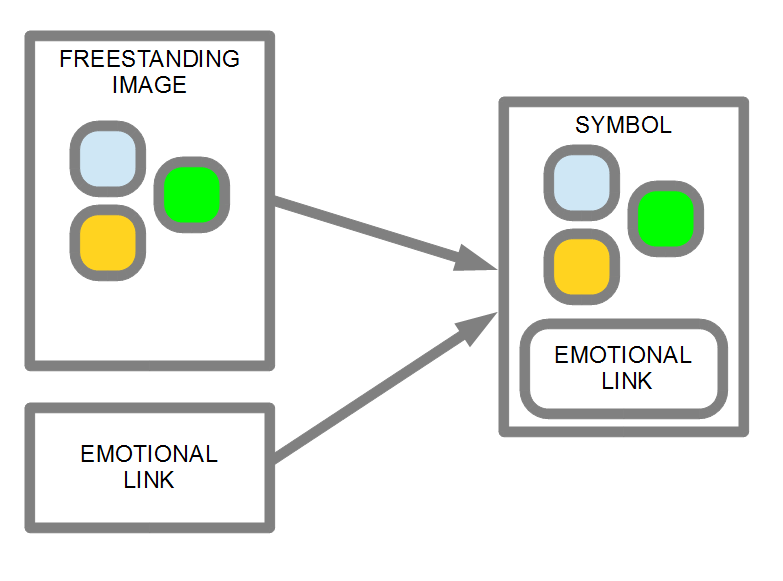 Jackie Chapell and Aaron Sloman have also written about “altricial” cognitive architectures, but have challenged the assumption that all learned symbols are grounded.

Altricial animals depend on parental care to complete development. The opposite is precocial animals which hit the ground running so to speak (maybe literally in some cases).

Human-like AI implementations would have to learn objective concepts about the world:

For example, young human infants reach to grasp an object with their mouths if their hands are not available, and once they have discovered that they can pull a toy resting on a blanket towards them by pulling the blanket, they can transfer the same action to perceptually very different, but functionally similiar materials (such as a sheet of paper).4Chappell, J. & Sloman A., “Natural and artificial meta-configured altricial information-processing systems.” International Journal of Unconventional Computing, 3:211-239 (2007).

But Chapell and Sloman claim that if the objective knowledge is tied closely to particular sensory and action signals within the body, then generalizations cannot be applied to new contexts.

Can emotionally invested symbols overcome this problem? It seems that they can, if the description of Stage 6 in regards to a sense of reality is correct. In Stage 6, a child learns how to contextually connect symbols logically.

Connecting ideas logically is also the basis for reality testing, because the child now connects experiences inside herself with those outside and categorizes which are which…2Greenspan, S.I. & Shanker, S.G, The First Idea: How Symbols, Language, and Intelligence Evolved from Our Primate Ancestors to Modern Humans, Da Capo Press, 2004.

Emotional investment in symbols allows general reasoning to emerge. This is the beginning of reasoning about non-emotional aspects of the world.

For example, cause-and-effect thinking with symbols comes from dealing logically with someone else’s intentions or feelings: “When I’m mean, my mom gets annoyed with me.”2Greenspan, S.I. & Shanker, S.G, The First Idea: How Symbols, Language, and Intelligence Evolved from Our Primate Ancestors to Modern Humans, Da Capo Press, 2004.

One thing to consider is the the design of the emotional aspect of the architecture. There are different ways to do that which would be compatible with this theoretical framework. With our current technology, emotional architectures are largely a software design problem.

Another implication for an altricial AI system implementing this kind of symbol formation is that it requires organism-level caregivers (for emotional interaction) and suitable environments for the various development stages.

So the design of the development context would be just as important as the baby AI’s cognitive architecture design.

Another consideration is that there is not necessarily a “correct” set of symbols.

Though we generally assume that we all experience sensations—such as sound and touch—in more or less the same way, significant variations are now known to exist in the ways individuals process even very simple sensory information. We have explored the emotional consequences of those sensory differences first described by Jean Ayres, a pioneer in occupational therapy. A given sensation can produce quite different emotional effects in different individuals—pleasure, for example, in one person, but anxiety in another. Each of us, therefore, quite unwittingly creates our own personal, and sometimes idiosyncratic, “catalogue” of sensory and emotional experience.2Greenspan, S.I. & Shanker, S.G, The First Idea: How Symbols, Language, and Intelligence Evolved from Our Primate Ancestors to Modern Humans, Da Capo Press, 2004.

The implementation and context differences will result in slightly different internal structures over time.

However, in software and robotics, one typically desires the ability to swap modules between systems.

So with this kind of internal structure a new kind of problem emerges if one wants to reuse the knowledge embedded in the artificial mind-world system for another agent or in order to generate future agents with innate knowledge.