The Seed and the Flower

Or, the Study of Non-Elephants

The only flowers which men have built directly, piece by piece, are plastic flowers. If you want to make a living flower, there is only one way to do it—you will have to build a seed for the flower and then let it, this seed, generate the flower.1Alexander, C. The Timeless Way of Building. Oxford University Press, 1979.

Figuring out the Quality Without a Name probably goes beyond merely architecture. Fittingly, this book was brought to my attention not by an architect but by people in the UX (User Experience) design community.

The author, Christopher Alexander, says that we have (unfortunately) come to think of buildings, towns, and works of art as “creations.” And that creation is thought of as a monumental design task, “brought to birth, suddenly, in a single act, whose inner workings cannot be explained, whose substance relies ultimately on the ego of the creator.”

But Alexander says that’s a stupid way of doing things:

The quality without a name cannot be made like this. Imagine, by contrast, a system of simple rules, not complicated, patiently applied, until they gradually form a thing. The thing may be formed gradually and built all at once, or built gradually over time—but it is formed, essentially, by a process no more complicated than the process by which the Samoans shape their canoe.

And if you’re thinking that this sounds very much like how biology works, then you have predicted the next key statement on the same page:

The same thing, exactly, is true of a living organism. An organism cannot be made. It cannot be conceived, by a willful act of creation, and then built, according to the blueprint of the creator. It is far too complex, far too subtle, to be born from a bolt of lightning in the creator’s mind. It has a thousand billion cells, each one adapted perfectly to its conditions—and this can only happen because the organism is not “made” but generated by a process which allows the gradual adaptation of these cells to happen hour by hour….

And Alexander claims that there is no other way.

But of course, this guy was an architect of towns and buildings. So he’s not saying they have to magically appear in some woo woo nonsense. He is designing these things. But it’s from a point of view of his design patterns, of accretion (building up over time), of indirect generation and of interactions of parts.

There may be a lot of overlap between this way of looking at building / town architecture and cognitive architecture.

Here are a couple ideas I thought of when reading the book that may apply to both.

“Nonlinear” means literally not in a straight line. When you think of what you observe as you drive, bicycle, or walk through a city, or out in nature, most of the things happening are not in perfectly straight lines. In science “nonlinear” means more. It means mathematically how something is represented. The straight line would be for example in a chart created via a function.

Basically, linear math is the easier kind and it seems great. But it turns out most things out there, in nature, and even things we make, are nonlinear. The real world is curvy.

Ever attuned to the possibility of bons mots, Stan [Ulam] once remarked that this was “like defining the bulk of zoology by calling it the study of ‘non-elephant animals’.” His point, clearly, was that the vast majority of mathematical equations and natural phenomena are nonlinear, with linearity being the exceptional, but important, case.4Campbell, D.K. Nonlinear Science: from Paradigms to Practicalities. Los Alamos Science Special Issue, 1987. https://permalink.lanl.gov/object/tr?what=info:lanl-repo/lareport/LA-UR-88-9072

Cellular automata5https://plato.stanford.edu/entries/cellular-automata/ can create complexity and even randomness from ridiculously simple rules.6Wolfram, S. A New Kind of Science, Wolfram Research, 2002 This first image is of “Rule 30” after a few iterations: 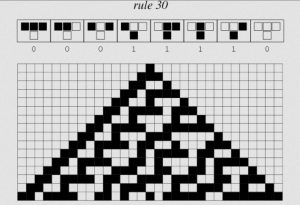 And this is of the same simple program after running it a bunch more cycles: 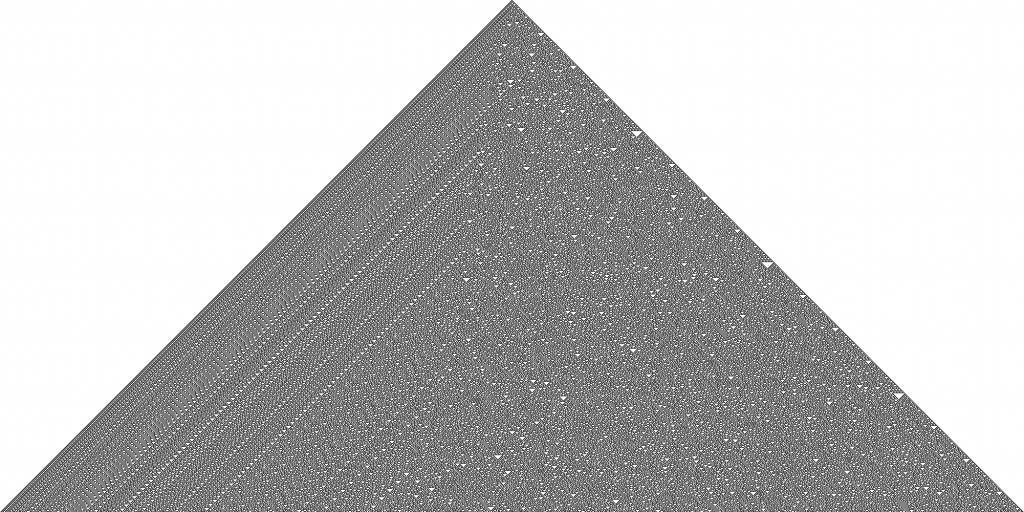 Behavioral robotics, which started in the 1980s (although there were a few examples before then), embraced the artificial organism in the environment concept. Like cellular automata, they had simple programs and no traditional internal models. And once unleashed in the environment, complexity ensued. And they exhibited what appeared to an observer to be intelligence of some kind.

If you’ve ever made a software agent in some environment, or really any kind of non-trivial software system, you may have discovered how complex and or unplanned the behavior becomes so easily.

If you’ve ever made a mobile robot or any other electromechanical system, and expected it to work perfectly as designed, you have probably encountered a rude awakening. It never works “out of the box” (unless you went through many cycles before putting it in the box). In fact, engineering in general is more of a building out of existing working things. And then your specific project still needs cycles of test and/or integration, etc. Which segues to…

The meta aspect is management of projects and what process the “creator” and his/her team uses. There may be noncoincidental similarities between some methodologies and biological processes such as evo-devo.7https://en.wikipedia.org/wiki/Evolutionary_developmental_biology

I’ve found that cycles of development—“iterations” or “sprints”—have to happen in technology. And it’s much better if there are feedback loops between testing with contexts. And contexts are environments, other artificial equipment, users, and so on.

Iterative development processes almost always work better than sequential types like Waterfall.8https://www.projectmanager.com/waterfall-methodology (See also What is Waterfall Model in SDLC? Advantages and Disadvantages). In fact, I’ve never seen a sequential development process work out well. Others have discovered this too. It’s probably part of the reason why Agile processes took over in software.

Some would say you have to use Waterfall with construction of buildings though. How would you iterate a building that is not a total death trap? Well I don’t know. Maybe there’s a bright crazy new style of “living” robotic buildings and cities in our future. And even if a skyscraper cannot yet be that way, you can probably think of examples of smaller buildings and areas that structurally adapted and grew and reconnected over the years and decades and also the spaces—the interfaces—between buildings and towns changing that way.