Your Visual System is Lying

A Tale of Two Visions

Does a hill appear steeper when you are already exhausted? Is it true that baseballs appear larger to players when they are hitting well?

You may have some suspicions that your perception is greatly affected by your context and may not always be correct.

I want to describe an interesting set of experiments dealing with perception and action. 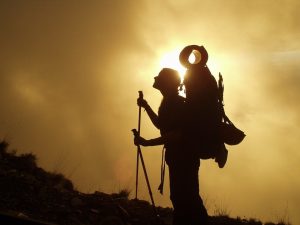 The two tasks in the experiment are supposed to be absolute, in that the slant of the hill is measured of itself, not compared to anything else. They had a third task used in previous experiments which was relative in that it compared the slant to the ground plane. So the new “absolute” disk was introduced to attempt to filter out task differences from the results.

In previous studies, visual matching and verbal reports were even more inaccurate when the subjects were encumbered, tired, unhealthy, or elderly, yet the haptic task was not influenced.

In Experiment 2, the subjects could see the slant of hill from the side (a cross-section). Yet they still over-estimated the slant with visual matching despite that they could actually hold the disk up in their visual field and match the line to the slant. The haptic tasks were still accurate.

The researchers concluded that these results support the theory that we have two independent visual systems, one for explicit awareness, and one that is visuomotor for immediate actions.

As another scientist not involved in the experiments explained2Koch, C., “Looks Can Deceive: Why Perception and Reality Don’t Always Match Up,” Scientific American Mind, July 2010.:

Proffitt [one of the researchers] argues that perception is not fixed: it is flexible, reflecting a person’s physiological state. Your conscious perception of slant depends on your current ability to walk up or down hills—hard work that should not be undertaken lightly. If you are tired, frail, scared or carrying a load, your assessment of the hill—the one that guides your actions—will differ from what you see. Not by choice, but by design. It is the way you are wired.

The Enactive Approach to Perception

Perceptual experience, according to the enactive approach, is an activity of exploring the environment drawing on knowledge of sensorimotor dependencies and thought.

It seems that the slant perception experiments mesh with the enactive approach. Again, from Noë:

Noë argued that we always have dual experiences even if we don’t realize it:

As psychologists and neuroscientists have discovered over the past several decades, our consciousness provides a stable interface to a dizzyingly rich sensory world. Underneath this interface lurk two vision systems that work in parallel. Both are fed by the same two sensors, the eyeballs, yet they serve different functions. One system is responsible for visual perception and is necessary for identifying objects—such as approaching cars and potential mates—independent of their apparent size or location in our visual field. The other is responsible for action: it transforms visual input into the movements of our eyes, hands and legs. We consciously experience only the former, but we depend for our survival on both.2Koch, C., “Looks Can Deceive: Why Perception and Reality Don’t Always Match Up,” Scientific American Mind, July 2010.

Noë addressed the two visual systems theory, but spent little more than a page on it, dismissing it as orthogonal to the enactive approach. Noë states that both visual streams depend on deployment of sensorimotor skills.

However, there are sensorimotor relations to both the visuomotor stream and the explicit awareness stream. The awareness perceptions are probably modulated by sensorimotor skills as they apply to a person’s current context, which is why Task 1 results in inaccurate perceptions.  Meanwhile, I think the visuomotor stream is tied into in a quicker, tighter loop that skips the slower type of aware perceptual processing that the other stream uses, which is why Task 2 is accurate.

In other words, both visual systems use sensorimotor skills, but in different ways, thus giving support to the enactive approach.